There are so many things I have been aching to share about my experiences with the Buhay Makulay Children’s Project this year. Each activity with the children leaves me in awe – of the resiliency of every Filipino child I’ve met, the gift of service so many kind hearts are willing to provide, but most of all of the steadfastness of God. I am bursting with stories, anecdotes, personal revelations. But I fail to carve out time to write them out, to find the right words that will sustain the power of the things I’ve seen, heard and learned.

In the past eight months alone, we’ve worked with thousands of children and hundreds of volunteers in five different communities, in as many different provinces of the Philippines. There are three more communities and hundreds more children lined up for the rest of the year. This is all in celebration of the eight years we’ve been facilitating the Children’s Fair for underserved communities. Even more than that, this is all in celebration of the enduring hope we have in God. Buhay Makulay’s vision remains: children at risk transformed into children of hope. 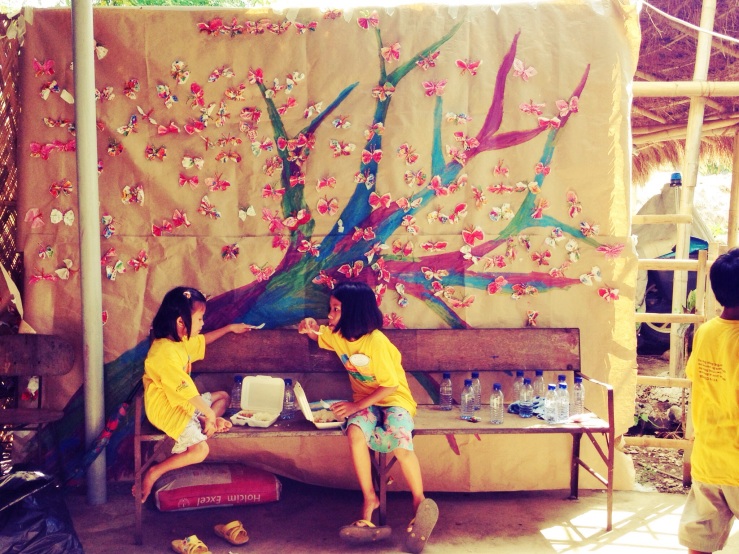 Two girls eating their lunch in front of one of our three hope trees. Children’s Fair in Calauan, Laguna. August 23, 2014.

Yesterday’s Children’s Fair in Calauan, Laguna, stands out for many reasons. Here are a few: We had the boldness (and spiritual whisper) to invite 1,500 children to the fair. (The most we’ve ever done was 500, and that felt like a reach!) Unlike some earlier locations this year, I have a professional and relational history with the community, and feel deeply invested in their growth. Close to the fair day, we also felt stalled by fences in our flow of finances and the lean-ness of our confirmed team of volunteers. The night before the fair, I was still greatly overwhelmed by the basic idea of managing thousands of people. And on a very personal note, I’ve been going through some private hurdles that have made the season coming up to the actual fair more challenging perhaps than any other point in my life. It has made this present season the most stretching, breaking and disorienting of all.

And perhaps all of that’s what made yesterday even more meaningful. Since traveling to Leyte in May, and understanding the depth of the super typhoon’s impact on the locals’ everyday life and oncoming future, a giant shadow of a question has plagued me: What do you know about hope, Tanya? What do you really know about hope?

The people I had met in Leyte survived a type of devastation I have never witnessed before. To hear of it makes your heart ache and tremble. But still it’s nothing compared to being the very person that has to walk through the devastation, one persistently painful inch at at time. And thus I questioned, what did I even know about hope? Why am I the person called to share this message?

And of course I know hope. I carry hope so preciously in my heart. But I wondered if the heart that carries it has been challenged enough. How would I take the punches, if the devastation had come knocking on my door and not Leyte’s, or Iloilio’s, or Cebu’s? I can’t say.

One thing is certain – that I am the one learning from each time I take the microphone to greet the children at our Children’s Fairs. Majority of the thousands of kids who’ve come to us, have walked (not ridden a car or train) from their homes, in their best (but worn or hand me down) clothes, through dusty streets, days after their last shower, on much less than full stomachs to get where they sit in front of me. That journey alone is one of hope.

More of this in future posts. Stay tuned, speak soon. 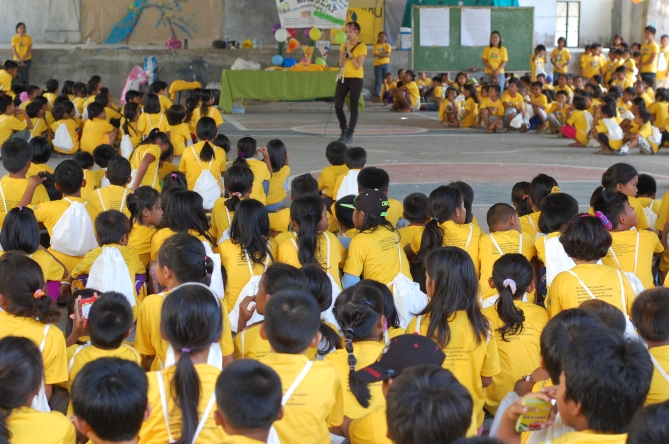 Me at the microphone, sharing stories with 500 children in Leyte. Children’s Fair. May, 2014.